If I had my way – in a world where the web was a land and I somehow became king – I’d be in charge of all comment sections. I might even get rid of some of them. This isn’t censorship, it’s common sense.

I mean, have you read comment sections lately? Even on the nicest web sites, read by calm, normal, mature people who have jobs and kids and a mortgage and access to good healthcare, you’ll find comment sections that somehow devolve into arguments, attacks, off-topic rants, insults, and links to sites offering you fantastic info on how to make $50 an hour from home. (I’m not talking about the people who comment here. You folks are smart and nice and good-looking and smell like roses.)

It’s funny: web sites allow comments on articles that the writer would be reprimanded/fired for including in the article itself (if it made it past an editor in the first place).

But I’d rather see comment sections on sites rather than resource everything to social media. With a few tweaks, we can save them! Having been online for about 19 years, I’ve seen a lot of comment sections and I’ve even been in charge of several. Here are my tips on how we can actually have comment sections online without everything going to shit (if it’s not too late already). If we band together, we can do this.

Everything in moderation. I’m not sure why every single site/blog doesn’t put every single comment section in moderation first. At what point did we decide, “hey, let’s make it so anyone can post anything they want at anytime!” In what world does this make sense? If you hold every comment for moderation, that immediately cuts down on the number of idiots you’re going to get and you’ll see spam in the queue before it hits the site. Part of running a site or a publication or a forum is you have to play the role of editor. You’ll be able to review the comments ahead of time and create the type of site you want.

What’s the downside here? Don’t have anyone on staff to moderate them or you don’t have money to pay someone? Then don’t have a comment section. It’s that simple (but come on, you can find a way to do it).

Think “Letters to the Editor:” This is the way it used to work: you’d read an article in The Saturday Evening Post or Wired or your local newspaper, you’d love it or hate it or maybe have a feeling somewhere in between those emotions, and you’d sit down with your pen & paper/typewriter/computer to compose a letter to the publication. Then you’d fold it and put it in an envelope and put a stamp on it – and these were the days when we had to actually lick the stamp because it wasn’t pre-moistened! – and then you’d have to walk or drive to your nearest mailbox and drop it in. The letter would then take a few days to get to its destination and then it would be weeks or months before the letter was actually printed in that publication. And sometimes it wasn’t printed at all!

I call those days “The Golden Age.” It’s great to look at an old newspaper or magazine (or even a current print newspaper or mag) and see the 5 or 10 letters the editor chose to be in the issue. There’s a reason those comments were picked. This is the way it should be now.

One of the reasons why people leave stupid, needless comments is because, well, they can. It’s so, so easy. You type up something – maybe you don’t even capitalize the correct letters or use periods or worry about spelling anything correctly – and then you hit send and your comment shows up automatically. Now everyone can read your SMART and CLEVER comments! You feel validated, and you can’t wait until someone replies to you so you can spend the next few hours arguing with them, back and forth! People are paying attention to me in a way they wouldn’t before, and I don’t even have to leave this chair!

Everything would be a lot better if it wasn’t more “fast” and “convenient.” Technology has given us many great things but it has also enabled a horrifying online world. If you make it just a tiny bit harder for someone to leave a comment, they might not leave one, and that way you’ll get the good comments instead of a ton of bad ones.

Quantity isn’t quality. It always amazes me when a see a story online that has 200, 500, even 900 comments on it. Why would someone read the comments section and decide, “you know what? The first 811 comments didn’t say enough, so I will leave comment 812 and tell people what I think!” This might be the definition of insanity.

Maybe you don’t need a comment section. If you were to tell a writer 50 or 30 or even 15 years ago that everything they write will be reviewed about 12 seconds after someone reads it, that the reader could pretty much say whatever they want as many times as they wanted, I’m pretty sure that writer would feel like they had entered some sort of literary hell (actually, I was such a writer back then and I would have thought that). Imagine print books or magazines having comments and remarks suddenly appear at the bottom of an article or in the margin, instantly.

It’s crazy to think about now – just crazy! – but there was a time when people weren’t able to type up their snarky, angry, stupid remarks, hit a button and have them appear at the end of an article a writer just published. It’s almost as if a piece of writing can’t stand alone anymore. It has to be accompanied by comments and forums and social media buttons and Like buttons and Favorite buttons. It can’t just exist anymore, judged only by the actual writing. Comments at the end of an article, in some weird way, can actually affect the quality of the writing. Not really, of course, but sometimes it seems that way. Gee, I really loved this article but reading all these comments by people who hated it proves how wrong I was. I better rethink my position!

Here’s a thought: you might not even need a comment section. Someone wants to say something to you? Fine. Let them open their e-mail or lick a stamp.

In my Saturday Evening Post column this week: random thoughts, summer books, Julia Child, D-Day, 100 years of See’s Candies, the meme of the week, and recipes.

Care to give a buck or two to help keep the sites going? You can give a one-time or monthly donation. Thanks! 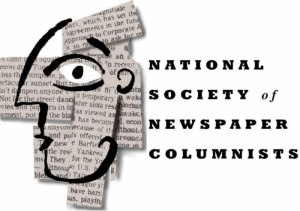