The new edition of The Saturday Evening Post has a cover that might be familiar to many readers. It’s the classic Norman Rockwell “The Runaway” cover from 1958. It’s part of our 200th year celebration, and this issue contains a look at many of our classic covers, plus a whole lot more. Subscribe!

Well, that was a bust.

The other day I announced my serialized novel and today I’m… taking it down. Not enough takers. It has only been a few days but I can see by the traffic and other clues it wasn’t going to happen. So back to the drawing board. I’m going to work on it some more and maybe do something more traditional later this year. Onward and upward.

Thanks to the people who were interested though! (Both of you.)

I guess that’s why I called this “an experiment.” If it wasn’t, it would be called “a sure thing.”

This year marks our 200th anniversary. Here’s a look back by our archives director Jeff Nilsson, the first in a series.

I’ve been seeing a lot of “blogging is back” and “newsletters are back” stories recently. And I’d just like to say … some of us never left.

I’ve been doing this blog since 1996. I never quit blogging, I never moved everything over to social media (I see so many writers giving up their sites and just posting on Twitter and Facebook all day and it’s…disheartening), I never changed the site to a static, never-updated landing page, and I never “pivoted to video.”

I’ve always been a fan of newsletters though. I published a print newsletter in the ’90’s and I wrote/edited several email newsletters when I worked at AOL and Tripod.com. I even still snail mail handwritten letters, which are different from email newsletters of course but also old school.

Anyway, I’m starting a newsletter. I don’t want to tell you what it’s about but I think it’s a neat twist on the usual newsletter format. I guess ultimately you’ll be the judge. But I do know it won’t be free. Sorry! Daddy needs a new pair of shoes. It won’t be expensive though (and this site itself will always be free).

Details coming soon. Right now I have to make sure I have enough rock salt for the snow that’s coming today. 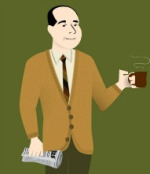 In my Saturday Evening Post column this week: random thoughts, summer books, Julia Child, D-Day, 100 years of See’s Candies, the meme of the week, and recipes.

Care to give a buck or two to help keep the sites going? You can give a one-time or monthly donation. Thanks!